The request to the UN was initiated by the human rights organization NGO Public Advocacy on behalf of Archbishop Seraphim of Ivano-Frankovsk and Kolomyia after legal expertise of the case by VSI Za zmogaus apsauga (Lithuania).

The UN Human Rights Committee obliged Ukraine not to evict the UOC community from the building in Ivano-Frankovsk which belongs to the community, reports the human rights organization NGO Public Advocacy, which had initiated the request on behalf of the ruling bishop of Ivano-Frankovsk and Kolomyia Eparchy, Seraphim. The bishop is also the head of the UOC church community, which holds services on the premises of the Transfiguration church.

The consideration of the Request of human rights defenders about the violation of the rights of the UOC religious community was examined by the UN Committee in accordance with the additional protocol to the International Covenant on Civil and Political Rights.

It is also reported that the preparation of legal documents in this case was carried out by  VSI Za zmogaus apsauga (Lithuania) and Denisov & Partners Law Firm (Ukraine), which are involved in protecting the interests of believers on behalf of the non-governmental organization Public Advocacy being in a consultative status with the UN Economic and Social Council.

Recall, on October 15, 2019, the Lvov Economic Court of Appeal ordered the believers of the Transfiguration temple of the UOC in Ivano-Frankovsk, located at 6 and 6B Chernovola St., to vacate the rented premises. 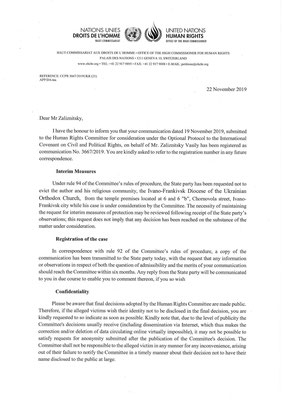 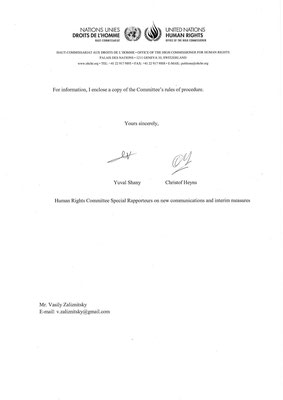